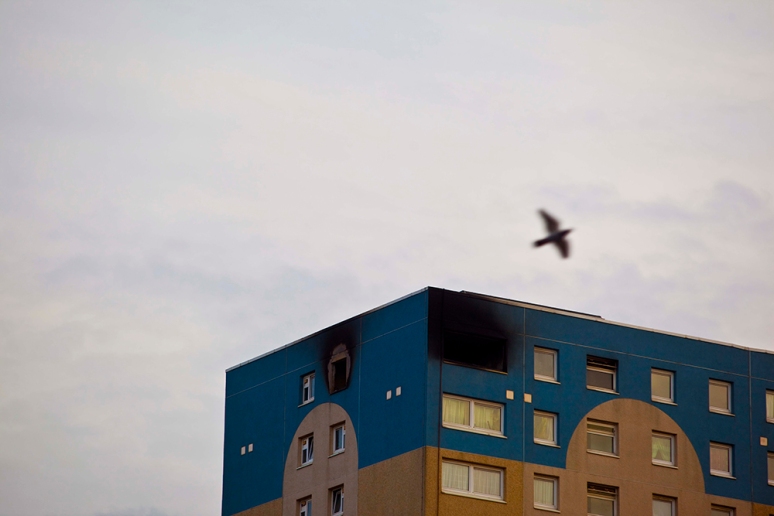 Kunaliny Alagaratnam 42 and Santhirapathy Tharmalingam,59, died in afire on the 16th floor of a tower block in Deptford , South London. Sandra Clarke, 50, started the blaze in her own flat using two cans of lighter fuel after a dispute over her rent arrears. Alagaratnam and Tharmalingam who were in a neighbouring flat, died of smoke inhalation during a fire in which 50 firefighters were involved. Sandra Clarke was charged and found guilty of manslaughter and jailed for 16 years.

I had an assignment in Greenwich late in the afternoon of February 4th and I was on a train when I went by Marine Tower in Deptford. I saw the smoke rising from the building and wondered how bad the fire was. And then I forgot about it. Until the next day or so when I found out someone had died in the blaze and that it was probably murder. So I went to the building and saw the usual signs of police activity at the ground floor which of course I photographed. A young man who was studying photography came up to me and asked me a lot of questions about my work and technical questions about my cameras. I was happy for the distraction because I was not happy with the photographs I was making and it gave me time to think. A few more people came up to the two of us and told me what they knew of the case. They told me that the male relatives of the two women had killed them. Honour killings and the such they said. Of course not knowing much about the case I believed them. So in one ear I am being told that Asian men dont like being disrespected by their women and in the other ear I am being asked questions about the future of Photojournalism.  I finally had to make my excuses and get back to the task at hand. I decided that I needed a photograph that showed the fire damage to the building and show it was the top floor. I walked several blocks west and north of the building until I was far enough away to see the top clearly. I had to use a telephoto lens, which I dont really like, to get what I wanted. I photographed until the sun went down. The whole time I watched distant planes fly by, the beautiful sunset light come in and out of the clouds, flocks of birds go by. Women with their children stopped to stare at me and one man came out wondering if I was photographing his flat. I said no and satisfied with my explanation stood with me for a few minutes pondering the black stain on the building. The smoke from the fire had blackened the northwest corner of Marine Tower.  Santhirapathy Tharmalingam was visiting her cousin Kunaliny Alagaratnam and I wondered if Santhirapathy had ever been to London before. I wondered what had brought Kunaliny to London and if that reason had been poverty, family or even war. To die in such way in a tower block so high up in freezing grey London. So different from the Sri Lanka.

The Landscape of Murder Photos