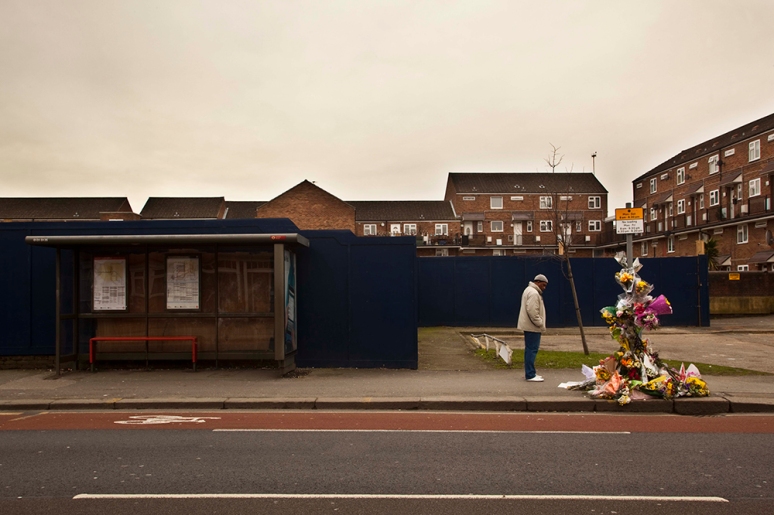 Ezekiel Amosu, 17, was knocked down and killed by a bus as he attempted to escape a teenage gang. Ezekiel and four friends were approached in Essex Close, Walthamstow, on Monday January 24, 2011. After demanding his phone they chased him into the path of a 123 bus on Forest Road at around 7.15pm. He was hit by the vehicle and pronounced dead at the scene.

I was surprised to find myself in Walthamstow again for the project. Just down the road from where Ezekiel Amosu was killed on Forest Road was Palmerston Road where Fiza Asif had been murdered a few weeks earlier. The photograph above had been my second attempt at making a photograph. The previous night after dark many people had gathered to lay flowers and remember Ezekiel. By the number that had shown up it was obvious Ezekiel was well loved by family and friends. Because of the way i had set out to work on this project, none of the photos I had made were of any use. I didn’t want to use a flash and there were a couple of other news photographers there as well working with flash and I just didn’t want to add to it. I also didn’t want the photograph I made to look like what you would expect a news photograph to look from a situation such as this. So I came back the next day and instead of the crowd the previous night I made photos in the cold overcast day as people wandered up to the memorial by the bus stop. The photograph doesn’t reflect how well loved Ezekiel was and I regret that. Yet it was the first photograph in my project that I felt captured what I was trying to do. It gave me the confidence to continue the work but I still felt unsure where I was going.

An interactive map showing where I have been on my project